So many exciting adventures happened this week. Berries were picked and consumed, Shannons were befriended, mountains were climbed.

Monday we went to Maple Springs Farm in Harrison, Maine.  They have pick-your-own raspberries – all sorts! We picked red, black, and golden raspberries.

Only half a pint made it home.. 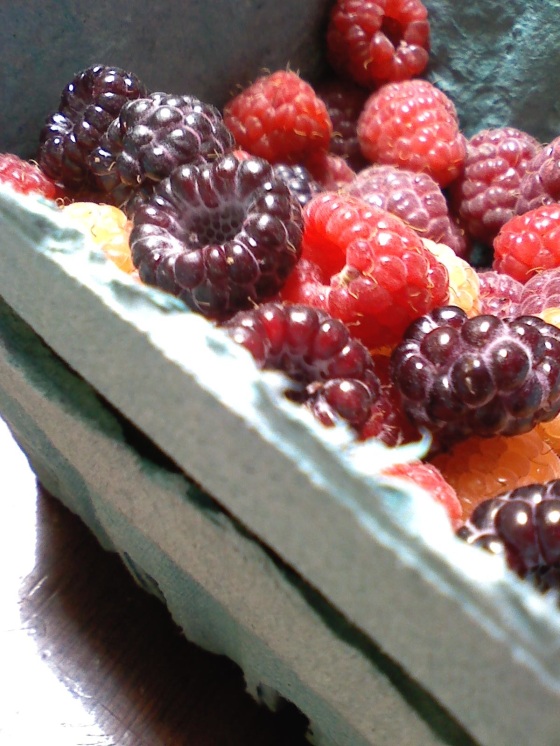 In the fall they have another berry harvest and I’m hoping to have learned some about making jam and canning by then.

On our trip to Maple Springs Farm, we also acquired one very lovely tomato plant (yet to be appropriately named). I am trying my hand at apartment gardening. I have a basil and tomato plants – hopefully peppers will be happening soon, too. So anyways, we got this tomato plant. I’ve been real good about watering it every day, but after a couple of days noticed a collection of what appeared to be chunks of soil gathering on the floor beneath the plant. I am naive to the ways of gardening, and had no idea that what was really pooling on my kitchen floor was FRASS. Frass is caterpillar poop. If I had known this, I would have know that we had no less than three tobacco worms living, eating, and shitting in our tomatoes.  First, we met this little guy.

And we named him Shannon. I harnessed the power of the internet to figure out what kind of caterpillar Shannon was and found out that although I desperately wanted to keep him in a fish bowl as my newest pet (and, in fact, Josh and I were gathering our things to run to the pet store immediately upon Shannon discovery), I read that Shannon would someday transform into a gargantuan, fuzzy moth, and in the meantime would quickly consume my entire tomato plant. The decision was made to move Shannon outside into the backyard. Right after Josh brought him outside, I checked the plant and came upon two more Shannons. They too were moved to the outdoors, and all Shannons seem to be fine with the transition.  Shannon 3 was the smallest of the trio:

I don’t have any pictures of the mountain climbing that occurred this week, but it wasn’t super exciting anyways. We hiked Bradbury Mountain, got winded because we’re terribly out of shape, hiked down and ate snacks. We then watched television for the remainder of the day to make up for all that physical activity. Snacks were created and eaten, such as this amazing barbecue faux-chicken and goat cheese pizza that Josh made:

Summer is slipping away from me, but we’re planning to make August a banner month!  Camping and picnics and crafting adventures to come – I can’t wait!!